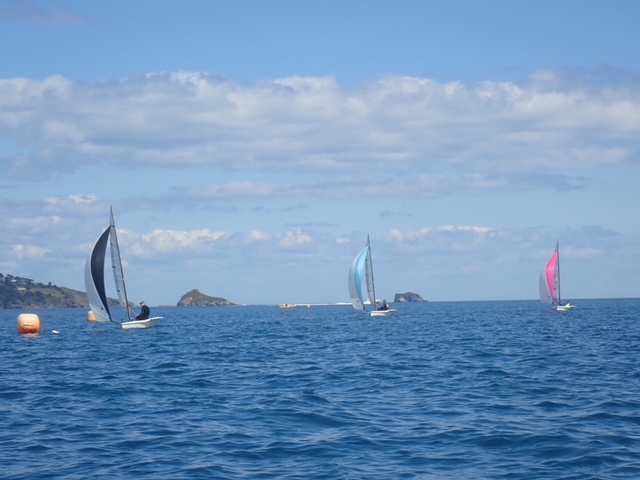 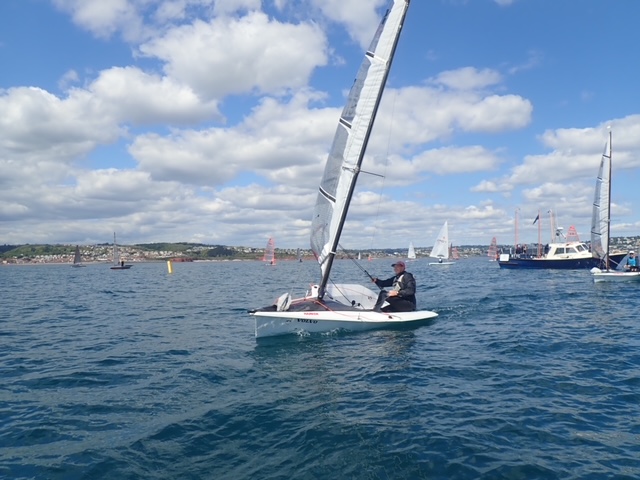 The RS100 fleet made their annual pilgrimage to the Paignton Riviera with many familiar faces looking forward to return to the circuit.  Paignton SC were running their annual POSH (Paignton Open Single Hander) event. The RS100s were in the asymmetric fleet, although the only other boat amongst them was a sole Vortex.

Saturday was a sunny affair with a forecast South Easterly force two which proved to have a mind of its own and challenged the race officer and sailors to work out what it was going to do next.  The windward mark was flying across Torbay for every beat.  You needed a keen eye to spot where it was for each beat.  Ian Gregory has always been the fleet light wind guru.  He has the frustrating ability to sail higher and faster than all around him, but he didn’t have things all his own way.  The shifty breeze meant that there was a lot of place changing going on with everyone finding themselves somewhere towards the front at some point, just not on the finish line.  David Smart was in one of his “I’m going to go the opposite way to everyone else” moods.  It worked in race one, bagging a second from nowhere, but he blew it in race two, when he threw away the lead after one lap by not covering the fleet.  Clive Eplett was always close to the front showing good consistency.  Mark Harrison was ever present bagging a third in the first race while Andrew Jones recovered from a frustrating race one to enjoy a second in race two.  The breeze switched off after two races, so we all pumped home for an early beer and the prospect of four races in more wind on Sunday.

The Sunday promise of more wind also saw the arrival of the breeze loving Huw Powell. He was delighted to have missed the fickle winds of Saturday and was first out of the blocks to launch.  However, race three proved to be rather similar to Saturday, with Ian Gregory again showing the fleet the way home, while Clive Eplett was sniggling out the puffs to take second from the fast approaching Tom Halhead in third.  Race four saw a very different complexion, with the wind finally coming in so toe straps could actually be used. While David Smart led after one lap his failure to cover the fleet left him floundering with Clive Eplett enjoying the win from a very impressive Matt Johnson in second and Tom Halhead again third.  With the discard now in play, Ian Gregory was way out front, but the mid-fleet was tightly bunched.  Who would keep their nerve in the final two races?

Race five saw the wind die down with toe straps again redundant.  The line was biased to the pin and Clive Eplett tried his favourite trick of a late port tack approach.  It failed!  He had to duck the fleet.  Ian Gregory won the pin, but spotted the windward mark making one of its rapid sprints across the horizon to starboard on the back of the mark boat.  He casually mentioned this to “Bang the Corner” Smart behind him, who needed no more incentive to tack and venture out to the starboard layline.  He led the fleet round the windward mark with Steve Jones and Jon Elmes behind, having also gone right, so enjoying some time at the front.  By the final beat Clive Eplett and Ian Gregory were in hot pursuit, but David Smart clung on for the win.  The U Flag (a sort of soft black) was being used for all the starts, so Jon Elmes and Tom Halstead only discovered at the finish line that they had been OCS.

There was a lot to play for in the final race.  The wind remained light and a group of four got away by finding the puffs up the middle.  Tom Halhead now had the bit between his teeth and sailed beautifully to claim the win from Ian Gregory with Huw Powell third showing that he can like light wind.  Andrew Jones was fourth, only to find he had been OCS, so elevating the late charging Clive Eplett to fourth.

Overall, Ian Gregory continued to demonstrate his mastery of the light conditions winning the RS100 Rooster National Tour at POSH, with Clive Eplett a clear second.  That impressive win in the final race had done just enough to take Tom Halhead onto the final step of the podium.  The Rooster prizes of the Mid- fleet Master went to Matt Johnson, with Jon Elmes winning the Rooster Endeavour prize.  It had been a great event and the fleet thanks Paignton SC for putting on another great show.